I am writing on behalf of Save Lafayette, a non-profit organization composed of
residents living in and around the City of Lafayette (“City”) concerning the proposed
Terraces of Lafayette Project (“Project”) proposed to be constructed at 3233 Deer Hill
Road, at the southwest corner of Pleasant Hill and Deer Hill Roads (APN-232-150-027)
by the O’Brien Land Company, LLC (“Developer”). Save Lafayette appeals the July 1,
20201 decision of the Lafayette Planning Commission approving the Project and the
Addendum prepared for the Project pursuant to the California Environmental Quality Act
(“CEQA”), set forth in Planning Commission Resolution 2020-14. In particular, Save
Lafayette challenges the following decisions of the Planning Commission:

Dear Mayor Anderson and Members of the City Council:
There are a number of grounds for denial of the Terraces application including,
but not limited to, the failure of the ‘Addendum’ to comply with CEQA, and specific,
adverse impacts upon the public health or safety under the Housing Accountability Act
(HAA), Government Code section 65589.5(d)(2), which have been covered in other
correspondence and reports submitted to the city. Please refer also to the
correspondence of our attorney being submitted for the August 10 hearing.

There are two other important threshold grounds for denial of the current
Terraces apartments application which are not being addressed by staff. This letter will
focus on these two grounds and request that these two issues be specifically addressed
at the hearing on August 10.

As you and the public consider these issues, it is important to understand that
staff in this matter is not being objective, but presenting one-sided advocacy in favor of
the project. That includes … 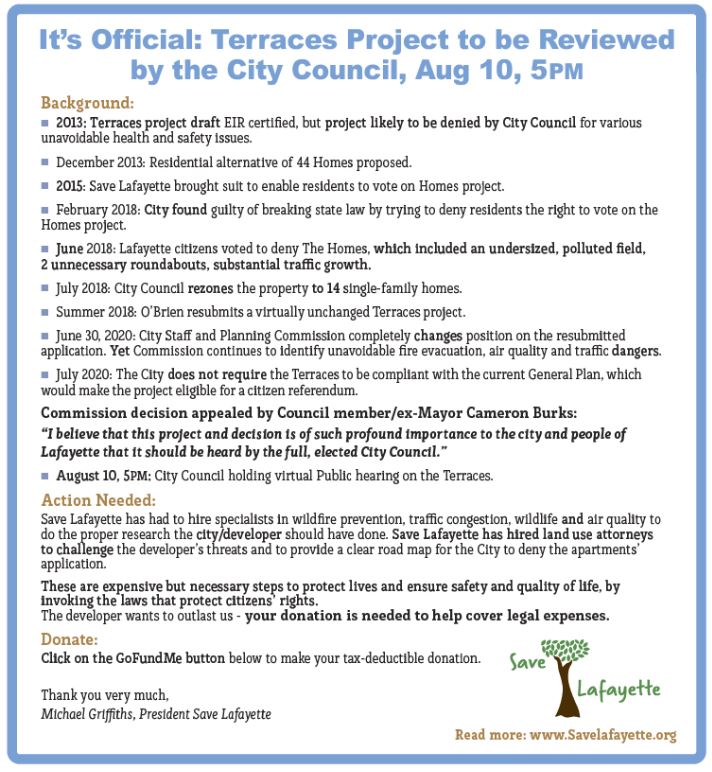 RE: The Terraces Project

The following information is provided to give you a more factual understanding of the housing that Lafayette has provided since 2014 and the future housing it can provide.  This information is also in response to the subjective housing concerns raised by City staff in their report to you.  It should be abundantly clear that the City does not have a housing problem, nor will it have a housing problem for its Housing Element and RHNA numbers, now, or in the distant future.

1) According to numbers provided by City staff, since 2014 the City has approved, in process, or in the pipeline about 920 housing units.  Under the City’s approved Housing Element, the City is only required to provide 400 housing units from 2014 through 2022.

3) And, if you take into account the up to 825 housing units that the BART property may require of the City by 2029 under AB2923, the total number of housing units available will approach 2,400 housing units.

4) Further, if you add the current growth rate of new housing based upon the period 2014-2020 on parcels other than set aside for RHNA numbers, there could be up to another 1,200 housing units approved, in process, in the pipeline, or available to be built by 2029.  When this figure is added to the above numbers, the total is about 3,600 housing units by 2029.  If the current number of housing units in Lafayette is about 9,000, then this is a 40% increase in housing available for the City by 2029.  Even if all of these housing units do not materialize, the City has nine times the amount required.  And these numbers do not even include The Terraces 315 housing units.

5) No other City in the State even comes close to meeting these numbers on a per capita basis.  And, given that the State’s population has been declining for the past few years, as well as in the nine Bay Area counties except for Santa Clara County, there could well be a much smaller increase in the RHNA numbers going forward.

6) The City has an approved Housing Element that was certified as being “in full compliance” with State law by the California Department of Housing and Community Development per letter dated March 26, 2015.  The City has adequate zoning and land available for full compliance with all RHNA requirements now and in the future.

In summary, you do not have to worry about Lafayette’s housing numbers.  It is not a valid reason to override the City’s General Plan, Hillside Development Ordinance and other protections.

Thank you for your consideration.

Re: The Proposed Terraces Project

As you consider the revived Terraces application, I thought it might be informative for you to review a copy of the November 25, 2013 City Staff Report for the Design Review Commission authored by Mr. Greg Wolff recommending denial of The Terraces application. In addition to City staff, both the Circulation Commission and Design Review Commission (DRC) recommended denial of the project to the Planning Commission in 2013. In Exhibit 1 of this City Staff Report to the DRC is a list of twenty-one General Plan (GP) goals, policies and programs from the Land Use Chapter of the GP (as it existed at the time the application was deemed complete) as they apply to the project.  Of those twenty-one GP goals, policies and programs, the project was found to be inconsistent with nineteen of them.

Given the Planning Commission and subsequently the City Council had previously certified the EIR in August 2013 containing 13 significant adverse impacts that could not be mitigated, one could also … CLICK HERE TO READ FULL LETTER

Terraces attorneys threaten the City with lawsuits BUT….

These five items below are the real threats to the City:

Please read the documents below to learn more 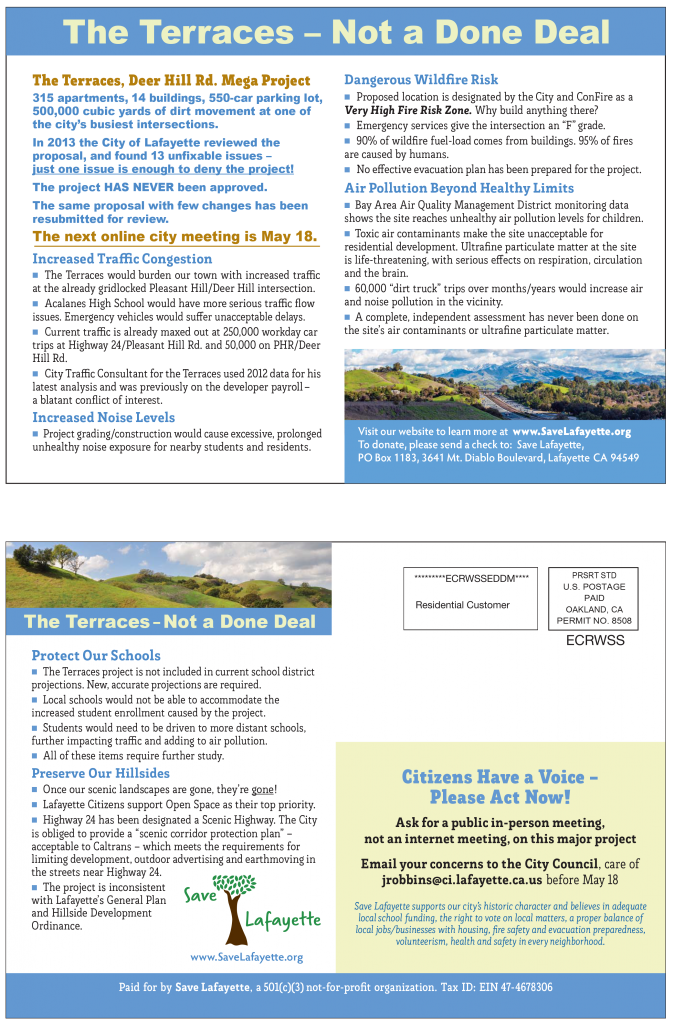 As you are aware, Save Lafayette has expressed serious reservations in the past
about using TJKM to undertake an updated traffic study for the Terraces, because
of its conflict of interest in having been previously hired by the developer. Since
City staff showed no interest in correcting this situation, Save Lafayette decided to
hire an independent traffic consultant to undertake a peer review of the January
2020 updated report prepared by TJKM.

Save Lafayette has hired Elite Transportation Group, whose principals – Lawrence
Liao and Lin Zhang – are highly experienced and respected traffic engineers, with
clients such as BART, SFMTA, the Federal Highway Administration, and
Caltrans, as well as various Bay Area cities. A copy of the peer review memo
prepared by Dr. Zhang is attached for you to read.

You will see from the memo that it raises numerous significant issues and
shortcomings with the TJKM report, all of which will need to be addressed before
it can be accepted and included in the supplemental EIR for the Project.

Following are some of the major issues raised by Dr. Zhang in his memo:

In conclusion, the TJKM report is inadequate and needs to be revised before it can
be accepted as part of the EIR. Alternatively, you can deny the project based on
the unmitigable issues raised in the Elite memo. We therefore request that you
allow fifteen minutes for Dr. Zhang and his colleague to present their findings at
the next Commission meeting on April 27.

In addition, as you know, a project can be denied if there is just one significant
adverse impact that cannot be mitigated. There are numerous un-mitigable
problems with The Terraces. Additional new and essential EIR related material
that is being prepared by Impact Science should be made available for the public to
review at least a month before any further meetings are scheduled on the Terraces
proposal. Many of these are significant health and safety issues – this project
would literally put people’s lives at risk. Lafayette is allowing plenty of new
housing elsewhere in more suitable locations – this project is not worth the risks
and should not be rushed through without the opportunity for full public
participation. 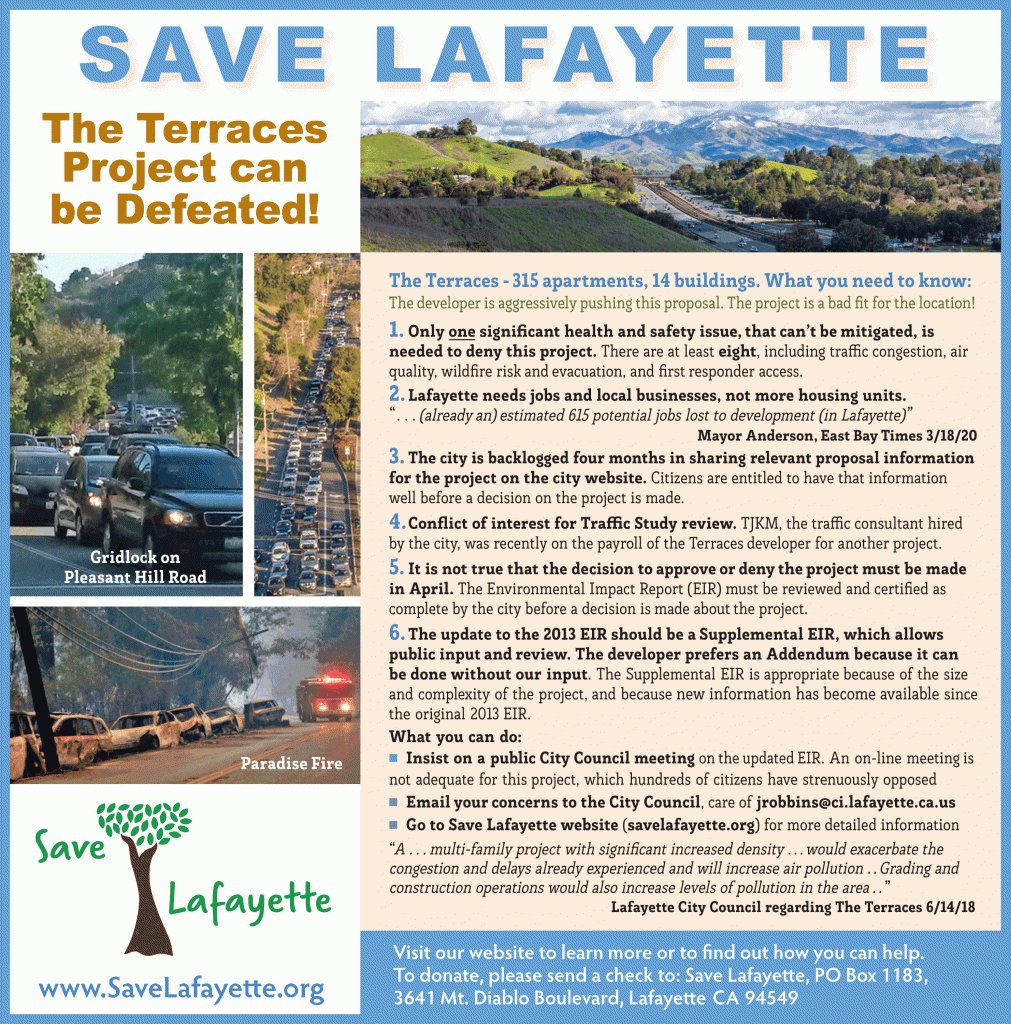 Are you looking to help your friends and neighbors during our shelter-in-place?
Are you needing someone to do your grocery shopping or pick up medications?
We are so very lucky that Lamorinda Village has offered to expand their services during our
shelter-in-place! Lamorinda Village is a local nonprofit organization dedicated to supporting older
Lamorinda residents who want to remain safely and independently in their homes, and with the help
of community volunteers they have been able to scale up their operations in our time of need.
For Seniors At-Risk requesting service, please either email to info@lamorindavillage.org or call
(925) 283-3500, and include:
Full Name
Email Address
Phone Number
Delivery Address
If you would like to Volunteer your time to help, please email to info@lamorindavillage.org, and include:
Full Name
Email Address
Phone Number
If you can’t volunteer, please consider donating to Lamorinda Village at:
https://lamorindavillage.org/about-lamorinda-village/donate/
Thank you, Lamorinda Village, for helping all of us!
https://lamorindavillage.org/

“Save What You Love”

Save Lafayette is a 501(c)(3) not-for-profit organization.
Donations are tax-deductible to the full extent of the law